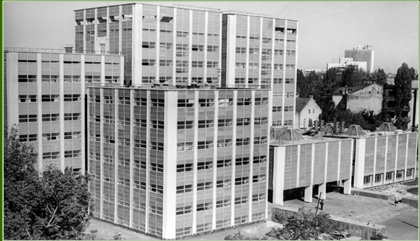 Ukrainian branch of the trust "Naftoprovidproekt".

Kyiv branch of the Diprotransnafta Institute.

The main activity is the design of oil pipelines, oil depots and filling stations in the former USSR. The first norms and technical conditions for the construction of enterprises for storage of flammable and combustible liquids have been developed.

Kyiv branch of the Diprotruboprovod Institute.

Carried out the design of main oil pipelines, gas pipelines, oil depots, filling stations throughout the former Soviet Union, as well as abroad (Mongolia). The first all-Union norms of technological design of oil depots have been developed.

He designed transport, storage, distribution of oil and gas throughout the former Soviet Union, as well as in Vietnam, Somalia and Iraq. The first all-Union building codes for the design of oil and oil products warehouses have been created, and unique research has been conducted on hot oil pumping by the Mangyshlak-Volga-Ukraine main oil pipeline.

It was one of the largest organizations in the former Soviet Union in the field of integrated design of transport, storage, transshipment, distribution of oil and petroleum products throughout the country and abroad (Iraq, Cuba). A number of normative documents have been developed, including norms for the design of oil and oil products warehouses and complex norms for vertical steel tanks.

Carries out complex design of objects of transport, storage, transshipment, distribution of oil and oil products, and also separate elements of their infrastructure in the territory of Ukraine, the Russian Federation, the Republics of Belarus and Kazakhstan, Georgia, Latvia, renders a wide range of engineering services, develops normative documents. safety of operation of oil main transport facilities.